It was a good omen. I awoke first to birdsong on the banks of a stream, at the start of the Black Forest. Even though it was 5:30am and I had just woken myself up with a frustrating dream of driving round in circles looking for a French hypermarket in Germany and shivering from yesterday’s cold, damp weather still in my bed (I have taken to closing the curtains on the overcab bunk at night as it stops the cold draughts from the skylight), I smoked a happy cigarette and went back to sleep until I could feel the sun on my face.

This it did at around 10am complete with more birdsong and the gentle rumbling of the brook. I opened the skylight a little to find no rain or wind, just a warm gentle wisp of forest air circling the camper. An ideal day for washing followed by a stroll in to town to sample their local delicacies for lunch. As this Stellplatz had a service station and we had restocked yesterday, my morning kicked off with a relaxing shower, not overly conscious of depleting resources. Washing done, we revealed as much skin as we dared and set off into the village.

The blue sky only conceeded it’s show of sun intermittently behind cloud, and after taking some photos and admiring the wares in the village shops we sat down to a lunch of a long white coffee and honest-to-goodness-real-life Black Forest Gateau! There really was no better day so far on this break and all our previous mishaps and catastrophes seemed to melt into the whipped cream and black cherries and drift a million miles away. 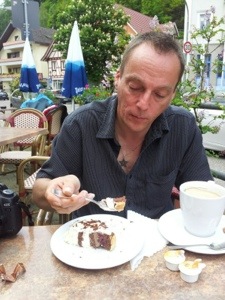 We discussed our next stop, Freudenstadt, that had been recommended by our mechanic on Saturday. Opposite the cafe, we could see a tourist info sign advertising Allerheiligen Wasserfalle and a ruined Abbey further along of the same name. On referring to the map, we could take that road before dropping down and turning right, back towards our original destination and so the plan was set. We stopped in at the local delicatessen for some milk and marvelled at our combined skill, ours and the owner, of completing the purchase of two cheeses and milk, without a single shared word of each other’s languages – lots of jolly smiles and arm waving!

Packing up, was marked with a couple of tears from the sky to show its respect to our departure and we returned the sentiment by remarking what a lovely village and a lovely day. About 5km along the mountain road was a car park signed off to the right for the waterfall, big wooden towers opposed it as the entrance to the path, where a large group of ramblers were being bearded back along the road, away from the path and back towards their dinner. We parked in the corner, closest to the entrance of the car park so that it was easy to drive back out again.

The footpath signs at the start of the waterside path indicated 400m to the falls, whilst the Abbey was a further 1600m more. We could see the path wind on into the distance where it left the bankside and rose to the next level by nicely laid, even steps. Along the staircases and the more steep banks were railings, held up with steel to aid the walkers and wooden fence planks to keep any wayward children from the temptation of the water.

We spent a pleasant 30 minutes wiling our way up the waterfall, photographing the white water from various angles and various speeds until the penultimate pool made us question if it was the roar of the water, heavily overflowing from a deluge of contents over the preceeding weeks, coming back at us off the rocks or was it raining? We pressed on up a curling stair of approximately 60 vertical steps to the top of the falls in view. By the time we reached them, the rain truly started. We could see the pathway continue ahead and we followed it onwards.

The sky that had been replaced in our distractions by the forest and the river, now reclaimed our attention with a deafening blow. We had climbed by car and foot hundreds of meters towards her and now she was revelling in our undivided attention. She lit up the scene of a steep ravine enclosed on two sides of us by sheer walls of rock and pine, the only way forward was an open, uncovered path leading on to the Abbey some 1600 bare metres away. The other way, though sometimes shielded, was quickly disappearing under water. We turned back, all the time she continued to show us her might.

The tempest below was accompanied by the symphony in the sky, all the while muffled through the water in our eyes, when the rain got to heavy and turned to hail, we dove for shelter under a tree or an overhanging rock. At times I ditched my lightening rod of a monopod when the flashes got too bright and shouts too loud and close. The steps had formed a second river now in a man-made bed, yet man had left us no comfort or sanctuary on this course through the steel entrenching it. Left vulnerable to her rage above, yet slowed by the descent, our hearts raced for the bottom of this staircase even though our feet could not. The rain hard now as the storm continued to circle ahead, trapped in the crevice of the cliffs. Mid descent, a rock gave shelter from the violence above, but not from the rain or our own fears. Do we crouch, though there are things above that would hopefully take the strike first? If the railings are struck as we pass them, will it arc to us? Do trees and rocks explode on impact? What does being struck by lightening actually feel like?

These silent thoughts, unshared as to not admit and increase fear remained with us. It was an impressive view, but such a shame if that was going to be our last. We really were as soaked in fear as our underwear was now telling us our summer clothes were in water. Any abate in the monsoon and we continued temptingly on. A desperate plea of “just hurry up and blow yourself out!” Was met with the brightest flash, at eye and ground level we had seen and we pushed our faces into the nearest tree, turning our backs to an impending strike.

Eventually, after what seemed like an eternity in one of Dante ‘s layers of Hell, we reached the towers at the entrance to the path. What had seemed like a good parking place now repented at the car parks furthest point to us, a lake and open sky between us. Sensing her failure the sky ripped open again. Twice as heavy physically and spiritually as when we started, we could see our end game. We took solace under a tower to see our path along the edge of the concrete space, along a line of trees. We ran! Hurled ourselves towards the shelter not caring if this was our last chance. As we dove inside she continued throwing the river, our invitation, at us, but she no longer cried and flared her eyes.

We could do nothing but strip and remove the outside from ourselves and bask in the warm and dry of this little England. When our spirits were contained, not yet recovered, we set out to set up camp in Freudenstadt. Only to find when we got there, the deluge had removed that too.

We drove around the town searching for stellplatzes fruitlessly and desperate for something to lift our souls, our thoughts settled on our triumph earlier in the day and the provisions we had in the fridge. We parked and I ran back to get some fries to go with the cheese. Once ordered I added some mayonnaise on top to bring back the sounds and tastes of Amsterdam not that long ago. Back to the camper with my spoils.

As if in mockery of our earlier encounter with The Beast, he came to tea with us in Freudenstadt. As we opened our most treasured piece, the stench of the bowels of hell met us out of the Beverly folded and taped packet. You could hardly bring it to your mouth to confound the stomach into thinking it was actually cheese and not some maggot infested piece of rotting flesh. Earlier in the day the camper Windows had been opened for the first time since leaving Blighty, and now again they were reopened so as to not blight our future. We apologise to any tramp that thinks we have left him a meal.

We left Freudenstadt for the second choice of camp site for this evening, despairing in our search for one in the town. Faithfully and trusting in our Sat-nav to get us there before bedtime. A sharp turn to the right in 300 metres. We had to turn around as it had assumed we were facing the opposite way. “Take the next right”. Ok, don’t know what that sign says, ah, must be cobbles. We drove up an inclined cobbled street for half a mile. The sky now subdued and silent in the dusk, the land to our left dropping away from us as we climbed. Looking over, there was no edging to the single track, badly cobbled street, just a new edging of tarmac on the left before the 500 metre or so drop to the village below. And of course the metal barrier in front of us barring people coming down from the main road above. Or up, as in our case. We tried releasing the barrier but it was bolted. No option but to reverse. If our stars were out we could not see them, but Caravaggio came through. The huge truck-like wing mirrors kept me on the tarmac guide as I gently allowed the van to roll backwards in reverse gear for the light. The breaks have held good all day in the rain and stayed with me coming back down into Christobal. We are not religious, but after e everything today and so many Jesus’ on the side of the road, you have to wonder if that is going to change before we return home…

One response to “A Very Reflective Experience”