Highs and Lows of the Etruscan Coast

After leaving Pisa behind, I went and spent a relaxing week by the seaside in Viareggio. The camper stop was free as it was on the side of a pine-lined road in between the trees. Easy to get in to, but the ridge between road and off-road nearly gave me an anxiety attack!

The road was about 1km from the seafront where there was another kilometre of restaurants, pubs and clubs. Along my pine clad road were hidden camp sites and holiday parks, the contents of which took the use of Italian roads to the next level! The steady stream of revellers returning to their accommodations of an evening were accompanied with a cacophony of car horns as the unlit road filled with unlit pedestrians and cyclists alike. Thankfully my little key-chain torch – a tescos 99p extravagance – saved me from accident or rebuke.

I travelled further south to Cescina, up over the hilly coast roads, down to the promise of long quiet sandy beaches on the med, and emptying and refilling of camper supplies at a pay site. On arriving I paid the attendant for four nights and went exploring.

After several hours walking on packed shingle beaches, going from one resort to the next, the quiet sandy beach still eluded me. Rows upon rows of deck chair regimented filled spaces for about 5km each side of the camper. The seemingly purpose built resort, the village was 3km inland, heaved with the seasonal tourists come out from the nearby towns and cities. The shingle beach had burnt and blistered 4 of my toes and having then to walk the 3km in to town and back for supermarket near finished me off.  What did finish me off was the unavailability of services to empty the camper, the neighbouring gun club on one side and very loud p.a. system permanently on the go on the other and the car-park style parking system on site that didn’t allow my windows or the neighbour’s doors to be open at the same time in 36 degrees heat.

The next morning I tried my luck at getting a refund on my blistered toes and heading back inland, but to no avail. Still, if I recouped my loses with a few days in Vinci nothing would be lost. The brilliant colours of the scenery that greeted me in this typically Tuscan landscape would not let me get disheartened for long. 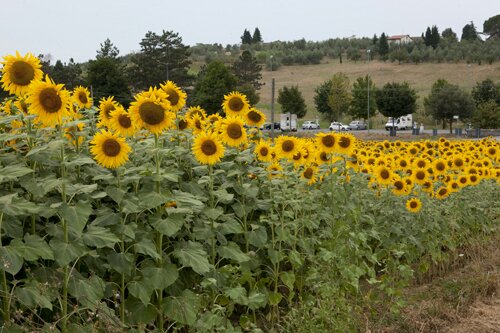