Creative Workshop 2: The View from Inside
To photograph from the inside. Photograph as Nan Goldin says ‘Your Tribe’. Study
someone you are close to and make images with them of an intimate nature.
Bear in mind your own vulnerabilities from the first task when you begin this new
photographic relationship and ensure you are completely competent technically so you
can focus on the making of images without being distracted by other details.
Alternative/additional task: The Communal Space
Identify and photograph a space that your ‘tribe’ interact or live within. In treating the space
as a body and considering our image making, can we communicate the interactions and
events that happen within the space? Can we infer a sense of the communal space?
The View from the Inside
This task really appealed to me as I do have an extensive ‘tribe’ that to me are my extended family. Unfortunately, over the years we are apart in physical distance, but I love spending time with all of them on a regular basis and when I can, get as many of them together as I can at home. I don’t venture out a lot so most of the socialising goes on at home. After years in the hospitality trade, this now continues at home too with an ‘open house’ attitude.
The first image is of Matti, a close friend who is as near enough to family as you’ll get outside of a yoghurt pot and a turkey baster. To get a natural image, we needed to be doing what we normally do, and just be ourselves in the room. I put the camera high on a window ledge to be wide enough and high enough to get us both in the shot and operated the camera through my computer desk, which is in the corner, and is where I live 90% of the time.
To start off with I thought that it would probably be easier to set the web cam up as a motion detector camera and let it rattle off a few hundred, but then I wouldn’t have the quality. There also needed to be some input from myself as a photographer with choosing the moments to capture. However, to start off with, everyone knew there was a camera in the room and there was an air of falseness about actions. I needed to let this go, to fire randomly and to almost let the novelty wear off. Thankfully, Matti put on some music which allowed the noise of the shutter to be masked and then both of us were able to relax a bit. It was still a good couple of hours of random and chosen shots before I decided to review what we had.
The image I have chosen, to me, reflects the level of intimacy that is shared between us at a deep emotional connection level. We don’t have to spend time entertaining each other, or talking at each other or making allowances, we are just comfortable to be. At times that can be in silence, or watching a film or the internet or in deep philosophical conversations about life. What defines this connection for me in the image is the mirroring of body language between myself in the foreground and Matti in the background. There doesn’t have to be physical contact to show intimacy when sub-consciously we are communicating that through our physical bodies. 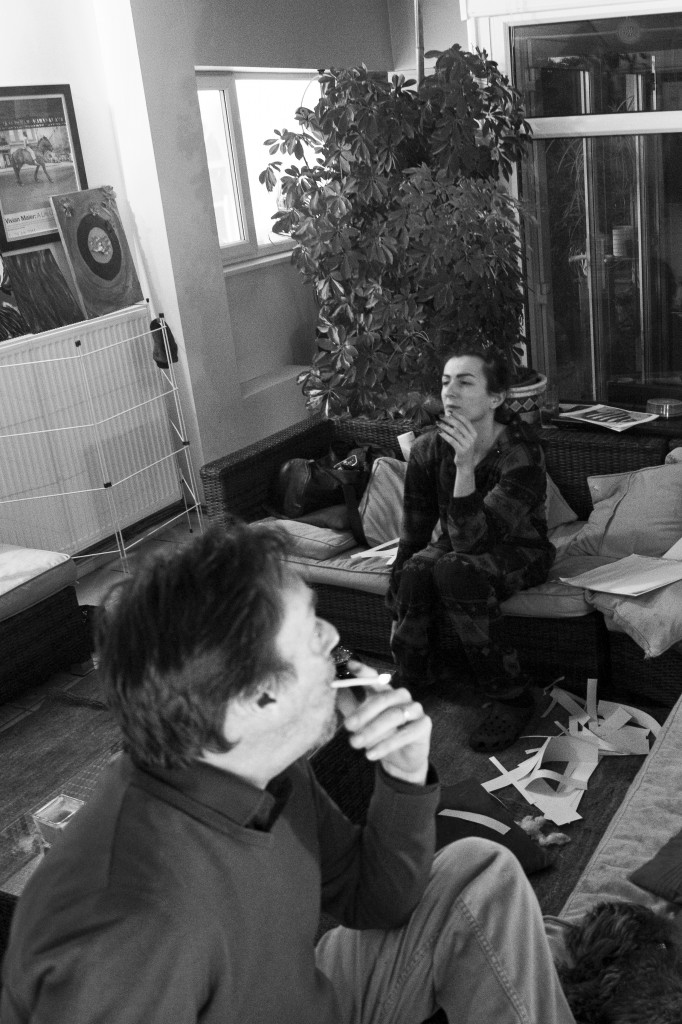 The Communal Space
I connected with this task as this is as much of me as it is the space, we are reflecting each other. In this house, I had the first opportunity to create a space that reflects my personality in the creation and furnishing of a conservatory extension. This was like condensing two decades of living and working in the hospitality trade in to one 3mx4m space! So eventually managed that, now to fit that in to a 2 dimensional photograph to communicate the use and feel of the space to an external onlooker.
This is shot low to reduce the space between the coffee table and the corner sofa and wide to allow the full view of the sofa to give the elongated view of the seating, hopefully imparting to the viewer that there is space for a lot of people. This is my entertaining space, it is communal and is meant to be so. Occupying the sofa like a pair of Anonymous protesters are our two dogs Dingle and Kayla, they are on the sofa, they run the house – love me, love my dogs, they are the children of the household. The abundance of greenery is bringing the outside in and again depicting a natural environment.
The foreground has the soft, warm lighting of the candles, also reflected in the background, nothing harsh or judgemental. The fire radiates warmth and a place to find light. The full ashtray in the front at a critical point of intersecting thirds to me and most of my friends, though the numbers are dwindling, this is a safe smoking space and a lot of us have been socially sidelined, to me this represents a common ground and a haven. There are microphones and remotes for entertainment systems to depict the amount of singing and parties that take place. Personally, I don’t like a space that is clinical and void of human ‘remains’, I prefer a sense of used and lived in. I have purposely left bottles and glasses around the room to emphasise that what matters in this space is the people, perhaps invoking the feeling that people are here, they have just left the room for a minute. 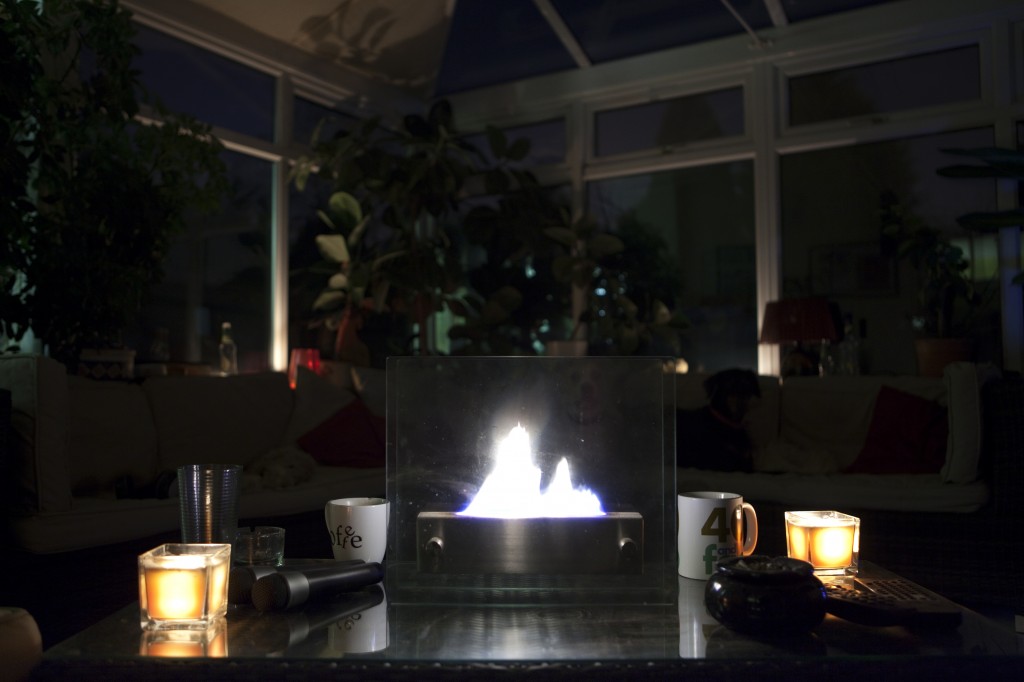