Our next stop, the second choice (it cost money!) was back a little north of Freudenstadt and we wound our way back through the mountains, following the streams cutting endlessly through their valleys. They were all much higher than usual, swelling with the deluge coming down from the north.

As we had got used to, the rain beat a steady tune on the roof to send us to sleep, only the following morning we woke to find a brown puddle on the kitchen workgroup, the majority of the water had been caught in the oven dish, opportunely waiting to be washed on the side. Caravaggio has taken an absolute beating from the weather so far on this journey, yet still she is holding out where she can. The angle of the wind coming down a footpath had blown the rain into the near side, couple with the incline towards the rear and kitchen area, the water had gathered and flown in the boiler’s down pipe! Needless to say, with the state of the weather and the scrap surface of a bodged car park, we didn’t begrudge our clear conscience of not finding any pay points. To emphasise this, I had to endure a half hour walk in the rain to find an open shop to buy something to get a one Euro piece to be able to fill up with fresh water. Nothing ironic I am sure…

We stopped in the town of Haslach, pulling up in the drizzle that had stayed with us all day. The irony continued with a Les Miserables twist as our next two days were spent in the grounds of the monastery. Haslach topping it off with a religious day off on a Thursday too, that must really get on the tits of the Germans. At least we are sensible enough to have Bank Holiday Mondays, shortening the working week to four days and getting in a 3 day weekend. Businesses must get a raw deal cos I am sure they’d get bugger all done on the Friday after having a midweek day off and tomorrow’s the weekend!

Thursday itself was actually the first day of moderate weather we’d had for some time, giving us and the van a little time to dry out. Not a lot to do seen as everywhere was shut apart from buy more coffee and more cake. Thankfully, the need for heating wasn’t as urgent so we’re able to limp through til Friday morning for an open motor home shop in the town. That didn’t have any gas apart from the small camping stove cans. On our window shopping spree, I had seen some in a hardware shop and was amazed that the cost here was only 28.5 Euros. A huge come down again, almost 25% less than previously billed. Absolutely no consistency in your gas, Angela Merkel, none whatsoever.

Freiberg is the principal city of the Black Forest, still on the Rhein, housing an impressive cathedral and university. As we drove through you could see the river engulfing park benches on it banks and then everything in between the camper markers on the site. Here, the tapping of the keyboards from WiFi access was drowned out by the thumping on the roof by the massive water drops from above. We reversed in to give the boiler the night off and hopeful the slope of the space would throw it off like the proverbial duck. Instead we got an old dry damp patch ‘re-soaked and some sodden bits of boiler ceiling thrown down as if in protest. 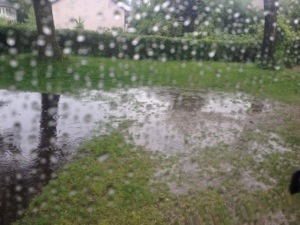 We left Frieberg the next afternoon to head East on the journey towards Lake Constance, Dachau, Munich, Hitler’s Eagles’ Nest and last Easterly point of Austria’s Vienna.