Mr Internet played silly buggers with my Germany/Swiss/Italian post and lost it, so I am going to bring this post up to present day a lot swifter than my usual posts.

My (and his) apologies.

Hopefully this will mean I can do more and more regular updates, though they may be a bit more boring and uneventful if only incorporating a day or two. However, I will try and concentrate a little bit more on what is going on outside the van as opposed to what’s in it (or not as the case may be) depending on whatever catastrophe is happening at the time…

A short recap of events to where we are now.

We left Germany heading for the Swiss border, uneventful journey to the border after ignoring the sat-nav taking us in the wrong direction, filling up with two gas canisters, fixing the choke that got stuck fully open, much to the annoyance of an old lady having a fag next to the van in the open air, bought my years worth of Swiss road tax for 40 Euros, fixed the indicators in front of the border control and set off through Switzerland.

The 270km journey was awe inspiring with the scenery of snow covered mountains and Milka cows. The trip was easy going on terra firma, until the labyrinth of road tunnels through the mountains. It was a white knuckle ride as every time a truck or (speeding) bus passed on the oncoming side, we got sucked in to their displaced air and launch forward an extra 10km an hour for a second. This meant holding the steering wheel very tight (thanks to the joys of power assisted steering that you only have to breathe on for it to move!) for as long as you were in the tunnel. Which was all very well and good until we got to the Gotthard Tunnel. All 19.7km of it!! 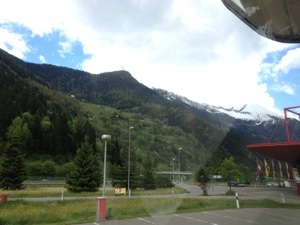 Needless to say, a stiff coffee was in order when we reached the other side of the border and finally made it to Italy. What surprised me was how immediate the Mediterranean climate was after the Alps. We hit Lake Maggiore first and the blue skies, clear water and palm strewn banks were just part of the reason I had earned for this journey. I have to admit that I had tears in my eyes as we hit the lakeside and camped up for the night, with the water almost in touching distance.

We spent a good few days going round the lakes of Maggiore and the Lombardy region, before heading up to Lake Como and doing the internal triangle from Como to Bellaggio and Lecco. Was a lovely day with great views across the lake, spending an hour at the tip having a coffee at a bankside bar. We came back down through Lecco to camp up and decide on our next bit of the journey. 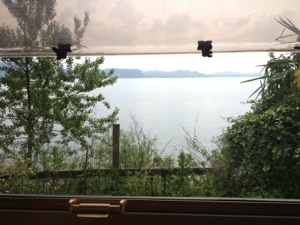 This is where us and the Sat-nav decided to go separate ways. Almost literally, as it took us to a fork in the road and told us to go straight on, though we could see that that was impossible according to the 2.0m height restriction of the very obvious, very in-front, archway. Hazards on and reverse back up the one way street to the voice of a very nice Italian lady telling us we needed to turn right. So we did the right hand fork, which immediately dipped down and swung right into a kind of funnel effect from two buildings either side, leaving a gap of 1.2m. The tyres screeched as they tried to grip on the cobbled road as I had to again rev the hell out of the engine to get a standing reverse start backwards before being sucked in to the funnel, probably with the inertia and weight of the van, leaving us trapped in their for all time!

Investigation of the free phone app sat-nav fully understood the meaning of the phrase ‘I am a bus’, or more accurately ‘I can’t fit in there you stupid machine!!’

Phone app got it’s first jaunt out in Milan as we headed from Como a hop-skip down to the fashion mecca of the world. Though we were unable to find the listed camper stop, we parked in a park-and-ride area with a couple of other campers and headed out to taste the city. It was only in passing that we noticed the main camper that we had parked by had actually not got any doors or windows or wheels left…

Milan for me was a disappointment as wherever you went you were being accosted by apparently Senegalese chaps wanting to tie stuff to your wrists, you know the type ‘I give you this, it’s free!’ then spend the next ten minutes chasing you for money ‘But I gave you something now you give me something’. I actually found myself getting really aggressively assertive with them, there was just so many. Hopefully there are not going to be as many of them in the typical tourist towns across Italy, or the ones I particularly want to see. I do want to see some, but my main reason to be here is to get a sense of Italy in the non-tourist areas.

And so we left Milan and headed to Lake Garda, the last and apparently the most mild of the Italian Lakes.  This was the opposite side of tourism to the Milan thing. Too many tourists and too much thrown at them. It was impossible to see parts of the lakeside for tourist shops or hotels and campsites. Every stretch of road had stone or steel barriers either side and if there did happen to be parking spaces, even on the very edges of the built up areas, they had put height restrictions in place. We eventually found a lovely village with parking for campers about 500m up the hill side with a magnificent view of the lake and just a slight dusting of tourists. Unfortunately it was next to a building site so we didn’t get an awful amount of sleep.

We set out to spend the next week heading East towards Venice at a leisurely pace before Justina’s flight home on the 20th. After spending two nights on the side of the Agide river in Valpollicella country, we spent today taking in the sights of Verona, of Romeo and Juliet fame. Or more to the point Giulietta, cos Romeo was nowhere to be seen! After a couple of days of mixed weather today has been full on sun, so making the most of the tanning opportunity.

As for the language, I may have faired better if we hadn’t done so many countries at once before arriving here!  So far I have thanked an Italian on the telephone in German, answered a lady in Milan in French and nearly bit the head off a waitress today who whilst I was ordering a coke and a coffee in Italian, just went ‘English’!!!! I am not that English that I will not try to learn and I am going ok, just having to separate the languages in my head first. Needless to say she didn’t get a tip!